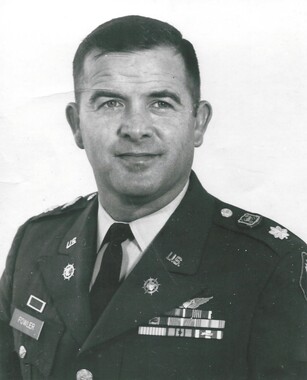 Back to Robert's story

A memorial service for Lieutenant Colonel Robert Martin Fowler, USA, Retired, age 91 will be held Saturday, January 11, 2020 at noon at Cookeville First Cumberland Presbyterian Church. The Rev. Christian Smith and Dr. Charles McCaskey will officiate. Interment with military honors will follow at Crest Lawn Cemetery.
His family will receive friends Saturday 10 a.m. until service time at the church.
LTC Fowler died Friday December 27, 2019 at Bailey Manor, Cookeville.
He was born October 14, 1928 in Corbin, Kentucky, to Carl Fowler and Elizabeth Welch Fowler. He received a bachelor's degree from the University of Nebraska, Omaha.
LTC Fowler enlisted in the United States Army in 1953 and was a veteran of the Korean and Vietnam Wars as a fixed-wing pilot, helicopter pilot and aircraft maintenance supervisor. During his distinguished military career, he was awarded many honors, including the Army Commendation Medal for Meritorious Service.
He was an excellent, loving father who raised six daughters from two marriages. He never used swear words or raised his voice. He instilled a strong work ethic in his girls and grandkids. His motto was-"work hard and get ahead." He also taught his children and grandchildren practical skills such as changing a tire, using a screwdriver and fixing minor things around the house.
He loved animals- especially his two dogs, Pugs and Peanut.
He was a longtime member of Cookeville First Cumberland Presbyterian Church where he was an Ordained Elder. He also taught Sunday School and served on the Building and Grounds Committee.
In addition to his parents, he was preceded in death by his wife of 36 years, Nancy Jo Fowler; grandson, Vincent LaVista; sister, Evelyn Disney; and daughter, Linda Townsend Spencer.
He is survived by his adoring family, daughters, Kathy Fowler of Cookeville, Mym Fowler of Virginia Beach, Virginia, Rebecca Michael of San Francisco, California, Nancy Townsend Byers and husband Gary, Tina Townsend Thurman and husband Ron, all of Cookeville; niece, Linda Disney McBurney and husband Bob of Corbin; grandchildren, Jason B. Courtney of Knoxville; Justin Lytal and wife Rachel of Knoxville; Loren Lytal Korch and husband Jonathan of Charlotte, North Carolina; Blake Thurman and Parker Thurman of Cookeville; Richard, Nicholas and Alex Michael all of California; and by great grandchildren, Palmer and Sutton Lytal and Emery and Nora Korch.
Memorial contributions may be made to Alzheimers, TN, Cumberlands Office, 1459 Interstate Dr., Ste 211, Cookeville, TN 38501.
His family wishes to extend a special thank you to the staff of Bailey Manor and Avalon Hospice for their compassionate, dignified, and loving care.
Hooper-Huddleston & Horner Funeral Home is in charge of arrangements. (931)526-6111. Share memories and condolences at www.hhhfunerals.com.
Published on January 9, 2020
To send flowers to the family of Robert Fowler, please visit Tribute Store.

Send flowers
in memory of Robert

A place to share condolences and memories.
The guestbook expires on April 08, 2020.