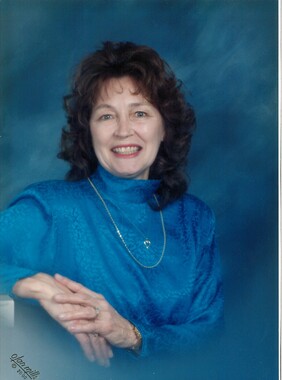 Back to Rowena's story

Rowena Farris, 79, of Navarre, Ohio, died Saturday, January 25, 2020 at her home following a lengthy illness.
A daughter of the late Fonza and Hazel (Disney) Jump, Rowena was born April 24, 1940 at Corbin, Kentucky.
Rowena attended Lily High School through the 11th grade. She then graduated from Lynn Camp High School in 1958 where she was named Prom Queen along with her future husband, Thomas, as Prom King. The couple then were married on August 2, 1958, and raised three children.
The couple eventually left Corbin and settled in Stark County, Ohio. Rowena was formerly employed at Wadsworth Alert Testing Laboratories in the Quality Control Department. Along with Tom, she was a member of the Eagles Lodge at Canton and the NuHall Dancers. They both also had a love of horses and were members of the Tri County Trail Association. Rowena also enjoyed gardening and flowers.
She is survived her husband, Thomas B. Farris; her children, Thomas Jeffery Farris of Canton, Ohio, Trela Kimble and Tricia (Larry) Horstman both of Bolivar, Ohio; her grandchildren, Jeffery Sky Farris, Justin Boughman, Brandon Kimble, Johnny Nesselrode, Breanna Schnegg, Trenton Kimble, Tommy Schnegg, Derek Horstman and Mariah Horstman; three great-grandchildren, Nevaeh Sky Farris, Elaina Boughman and Johnathan Nesselrode; two sisters, Doris Moore of Corbin and Lena Adkins of London, Kentucky; a brother-in-law, Earl Proffitt of Cincinnati, Ohio; and several nieces and nephews.
Rowena was preceded in death by her parents; two sisters, Deloris Evans and Dolleen Proffitt; and two brothers-in-law, Estel Moore and Ronnie Adkins.
Visitation will be held on Thursday, January 30, from 4 to 7 p.m. in the Geib Funeral Center at Dover. A funeral service celebrating Rowena's life will be held on Friday, January 31, at 10:30 a.m. in the funeral home with Pastor Brian Flood officiating. Burial will follow in Dover Burial Park. Following the committal service, a luncheon will be held in the Hospitality Room in the funeral home.
Those wishing to do so may send the family a personal condolence and light a candle in remembrance of Rowena by visiting the funeral home website, www.geibcares.com.
Published on January 27, 2020
To plant a tree in memory of Rowena Farris, please visit Tribute Store.

Plant a tree in memory
of Rowena

A place to share condolences and memories.
The guestbook expires on April 26, 2020.